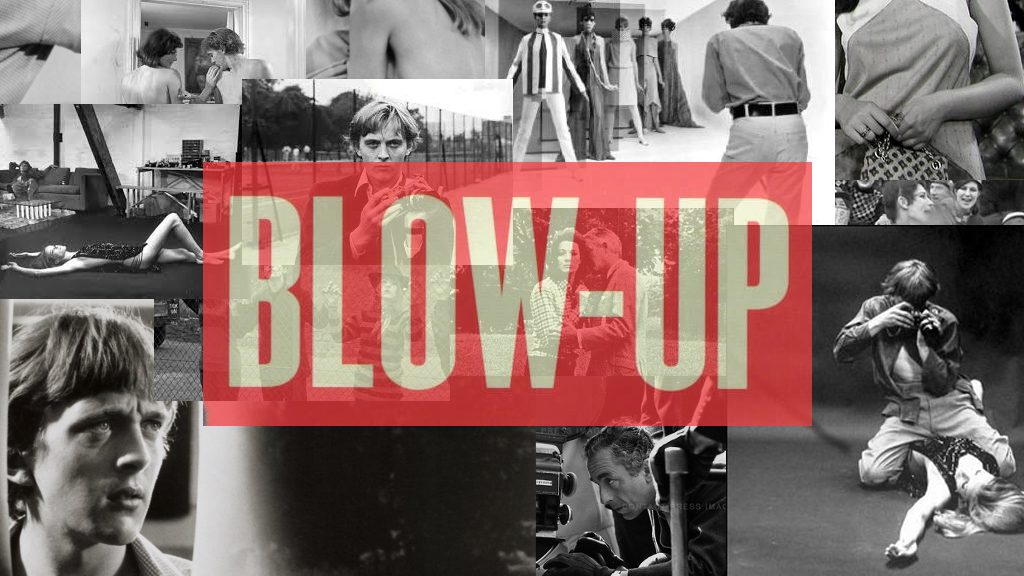 Walking over there was something that I absolutely had to do, like a religious devotee goes to visit a shrine where a miracle has happened.

The day I went to the park was cloudy and grey.

I walked inside it, and I felt like I was hunting a ghost.

Not a lot of people were around me,

Just a few sitting on a bench and some other playing in the tennis field.

The Park after 40 years still looks the same, isolated and mysterious. The crown of the trees moved vigorously and the wind made the leaves speak.

This is a place where It seem that even the silence matters.

I decided to walk to the top of the park. At the end of the stairway,

I found a clearing with two parallel trees.

That was the place.

The beginning of the story.

BlowUp was made in 1966 and won the Palme d’or in 1967. It is the first of the Michelangelo Antonioni “English triad” (Blow Up, Zabriskie Point, The passenger) which had been preceded by another important Antonioni 60s Triad.

In all his films until the end of his career, the soundtrack and the music always remained the subject of exhausting research and evolution, a continuous drain of work, subtraction and drying.

Giovanni Fusco, musician of the first Antonioni, tells how his musical scores, already bare and ghostly, were further deprived and annihilated by the will of the director in the editing room.

Just to mention a few.

The sounds of the city become the soundtrack, and the music becomes the sound of the city.

An integral part of the action,

Sound could have come from a radio or by a group that was performing in a club.

He always refused the way music was normally used in Film Production,

a way that reduced the art in simple accompaniment and simple emotional emphasis.

A way almost dissociative and destructive.

He definitely stopped to using the music in the film and started to make the films (even) with the music.

Music was a dialogue with silence and with the noise. Because even the silence matters, speaks.

A movie that embeds 2 different angles,

and without solution, as Antonioni always does.

But you could be fooled by appearances. What may seem to be talking just about Sex, Drugs, Rock n roll, London and the bit generation actually wants to analyze the social environment around the characters, the different human reactions, the states of mind, feelings and doubts that have been created as a response to a violent event, unexpected, improbable and impossible, a real breaking point created deliberately by the director.

A murder in BlowUp or, for example, a disappearance in the movie “un avventura“

Everything looks paradoxical and surreal.

And surreal is the right word to use.

After I watched BlowUp for the first time, I keep thinking about it for the next 3-4 days

In the beginning you feel completely absorbed by the Lifestyle of the protagonist, that I could say is a dream life for a normal human, notoriety, money, sex, girls…..

But soon you start getting through a sense of disorientation. It could seem stupid, but I started thinking what I could have done in the same situation:

Could I really be so strongly obsessed about finding out the truth??

And if these murderers would come looking for me??

In the end those people are killers.

Why is the body still there after one day???

Nobody cleaned the scene??? So they wanted someone to find the body?

What does the end of the movie mean?? What is hiding? What does it want to say to us???

That we have to look deeply into the reality, because what we see could not be what it appears??

In the end, humans have the tendency to see everything from only one point of view. Should we start to look at the world in a different way??

A picture could hide something else?

A couple in the park could not mean only love??

The life of a rich famous photographer, completely absorbed is his job, could not be as perfect as we could think???

The swinging London with all his party fashion, drugs, women and music, could have been just an appearance?? One side of the medals?

Otherwise why the people who were listening to the Yardbirds were looking so bored??

Watching a tennis game without a ball!!

But who decided that we need a ball??

Or taken from another point of view, are we so stuck that we start to see something that doesn’t exist only because other people can see it??

For sure in that year, 1966, it sounds rather plausible that a director wanted to analyze and describe the different ways which human perceptions works.

Antonioni is probably interested in experiencing the tightness of his favorite themes, the impossibility that the men and especially the artists (photographers, directors, reporters) have to understand the world – most of all in the new scenarios of modernization.

Antonioni shows the fallacy of the human eye in front of an unknowable reality,

A sign of the replacement of reality by the representation.

A fusion between the neorealism (the way which he described the environment where the story takes place) and the surrealism (in creating an unreal and unlikely action, a kind of matryoshka meanings, a dream or a nightmare that looks like reality).

Psychedelia ( Read about Psychedelia) was knocking at the door and Antonioni was also very close to the contemporary Robert Bresson.

SO BlowUp a MICHELANGELO ANTONIONI FILM

is the fusion of all of this, A movie where even the silence matters.

A neorealist, psychedelic and surrealist piece of art.

(Click Hre If you want know more about Blow up, Film Theory,  and the logic of Realism)