I’ve always been firmly convinced that there are a lot of different and intelligent ways to talk about music.

Obviously the most commonly used method is writing. But it is certainly not the only existing and used form for this purpose. In the centre of my attention since “day one” has always been and, will always be, the exasperated research of new artists who relate their creations with the word “MUSIC“. This is the reason why today I decided to Publish the Interesting Work of Keith E Lee.

I love the Keith E Lee‘s way to describes modern musical annihilation through the illustration. The constant modern attachment to the past which We breathe every day and the extreme conviction of some that nothing good exists today and nothing good will happen in the future.
But is not this a story already heard???. I mean, the deliberately use of the classification, demolition, demonization and ultimately the derision for destroy new musical expressions?!?. The nostalgic never die.

His use of comic, black and white, text and image wants to treat, criticize this situation in a calm and veiled manner. A non-convective and modern style expressed by using humour, satire, and sarcasm.
Keith E Lee‘s illustrations hits. And they have the effect of a bullet exploded at close range.
This is what I could understand about Keith E Lee‘s work.
Did I understand wrong?.

Keith E Lee is an illustrator artist and a guitarist singer songwriter living in beautiful Stone Mountain, GA USA.
He has been performing and recording since 1985 with a number of groups, including the King-Kill/33°, The Hookers and Liars Club.

He draws exclusively with pen and ink in black and white.
Subject matter varies from familial bonds and autobiographical one panel comics to cheesecake. (American slang for curvy, sexy female models) and horror.
Some work is a product of delving into his subconscious and these are realized in a psychedelic fashion, but much of his work is about MUSIC. He takes commissions and does merchandise. 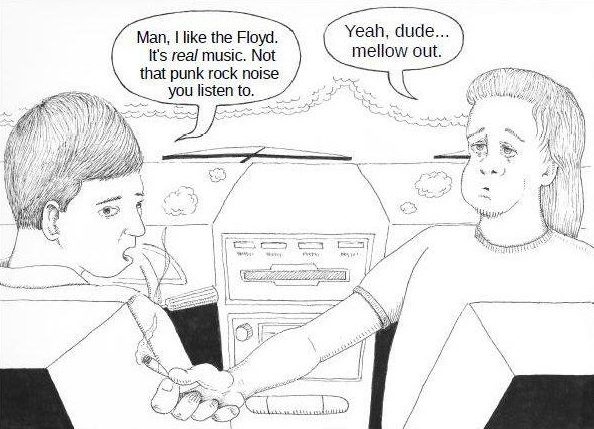