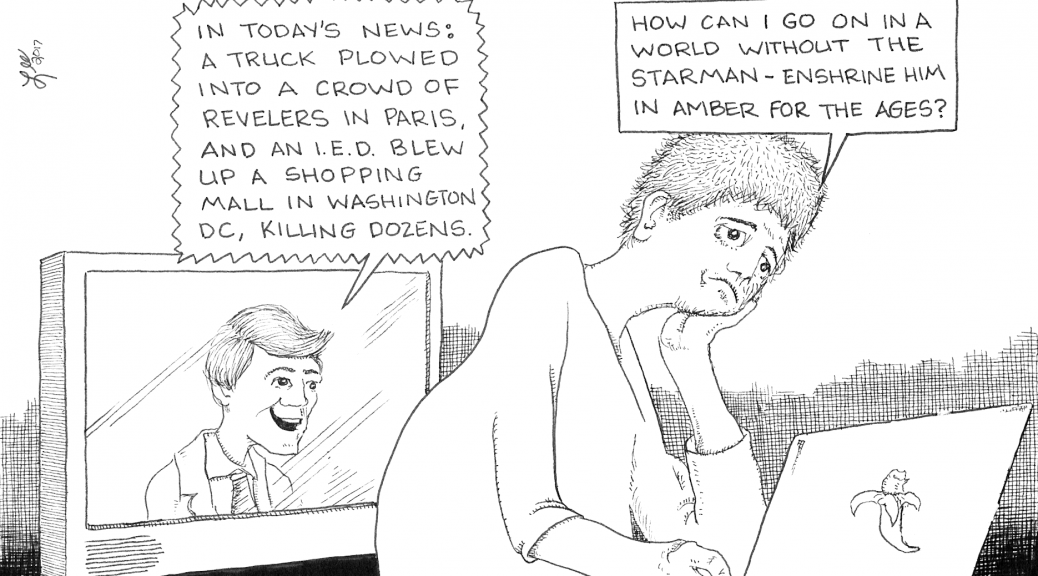 When David Bowie died last year my heart sank, not just because we had lost one of the last truly innovative artists, who was still producing relevant music in his sixties, but because I knew what was about to come.

A few months later and it was Prince. I’m not that enamoured with Prince, but it was clear that the world would be that much greyer without his particular shade of purple colouring my periphery. The initial sense of sadness was soon taken over by the same sinking feeling that struck me after Bowie’s death, however.

Within minutes of both, videos were shared, sadness pronounced and the lamenting of our fragile existence infused in all discourse. So far, so understandable for artists that had been a part of so many people’s lives for so long.

And then the memes started. “The stars look very different today” said one hastily put together artistic brainfart. At least that had something to do with Bowie, what Antoine de Saint-Exupery’s Petit Prince was meant to represent for Prince I do not know. Why not a meme showing David Beckham wearing the Aladdin Sane flash across his face if that’s the standard we are going for?

This was followed by long posts about how their deaths were really all about them, the person expressing it. Not to be outdone, some described how it was even more upsetting for them than when a family member had died. When genuinely experiencing grief, the chances are you are not going to start ranking the experience. A new cult was being born in real time.

In a peevish retort I posted Bowie’s, and arguably music’s, lowest moment, his duet with Mick Jagger on Dancing In The Street…..

….. But I knew better than to go against a mob who have been whipped from the pulpit of mass grieving like the citizens under an authoritarian regime in the wake of the dear leader’s death.

About an hour after Michael Jackson died in 2009, a friend messaged me saying she hadn’t stopped crying since she heard the news. While I was sure where this conversation was going, I wanted to be sure and asked why. “Haven’t you heard? Michael Jackson is dead,” she sobbed (if that’s possible when typing). Her disbelief at my calm and reasoned response to the news of someone whose work neither her nor I liked and whom we had never met, ended with the words “What happened to you?”

It isn’t enough to grieve, everyone else has to join in.

Grief and musical taste have little to do with choice, you either feel it or you don’t, but these reactions are never anything to do with music, they are expressions of both self-centeredness and belonging. The former is nauseating, the latter something central to the experience of music and its power of bringing us together. The problem is the music itself gets lost. Great pieces that once made the hairs on the back of our necks stand on end, become little more than hymns released on repackaged “Best of” CDs on supermarket shelves. Staid reverence then soon replaces immersive joy.

Stripping Bowie and Prince of their humanity and colour has turned them into the most mundane thing of all, gods, and in those circumstances, there is only one response, to be a blasphemer.